Myriam Montmory is French-Canadian. At 18 years old, she started to travel around the world and soon discovered a passion for foreign languages. She holds a degree in International studies & modern languages from Laval University, Québec, and a master degree from Stendhal University, Grenoble, France. She also studied Chinese at Guanxi Normal University (China), Spanish at Universitat Autonoma de Barcelona (Spain) and Greek !

She is a language teacher, translator and manager with Simon Montmory since they settled down on Greece.

For her, climbing is a way of life: the occasion to travel, challenge herself, discover the most beautiful nature around the world and meet people… And Greece offers it all together! 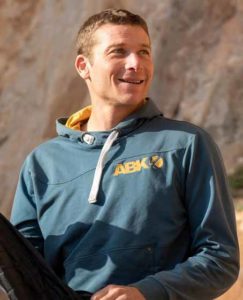 Simon Montmory is a certified climbing instructor (French National Diploma), passionate climber and route setter living on the island of Kalymnos, the climbers paradise.
Every year, climbers from all over the world come to share his passion and to take avantage of his experience to improve their rock climbing skills in the best routes of Kalymnos & Telendos islands.
All year he runs 5 days climbing courses, private tuition and multi-pitch.
read more